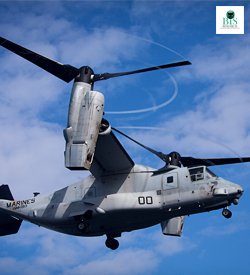 Aircraft have been an asset to humankind since their inception as they have helped us achieve the heights we could not deem possible. With the advancement in technology and engineering, a plethora of aircraft have been developed which have unique characteristics. Rotorcraft and fixed-wing aircraft are the two major types of aircraft, in which rotorcraft are capable of vertical takeoff and landing, whereas fixed-wing aircraft require a runway and are mainly used for the commercial air travel covering long distance. Fixed-wing aircraft lack the hovering ability of the rotorcrafts and hence, cannot be used in any area without platforms to carry out emergency tasks. Hence, there has been an inevitable need to develop an aircraft with the combined qualities of rotorcraft and fixed-wing aircraft.