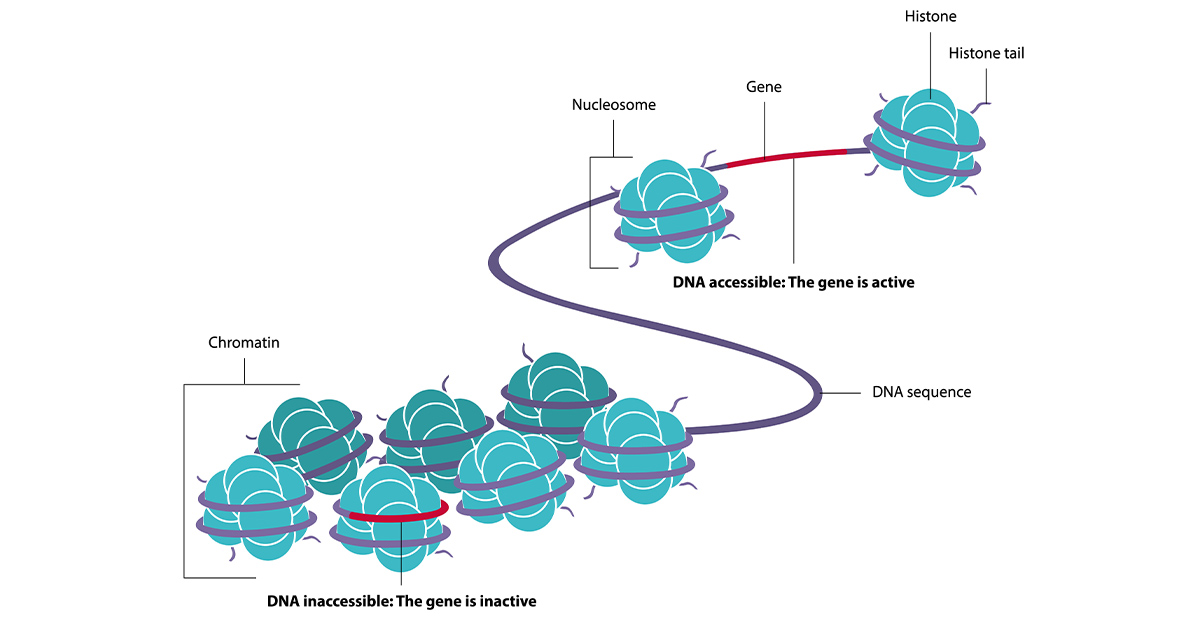 Genes play a role in health, but so do behaviors and the environment. Epigenetics refers to the study of how these factors cause changes affect the way how genes work.

Unlike changes to DNA, epigenetic changes are not permanent. They do not change one's DNA but instead will change the way in which the body interprets a DNA sequence. They can be undone if one changes one's physical activity or environmental conditions, such as diet.

Example of epigenetic change is DNA methylation. DNA methylation is the addition of a methyl group to a section of a DNA molecule, preventing certain genes from being expressed.

Epigenetics is the primary reason why brain cells look different than skin cells. Both the cells contain the same DNA; however, their genes are expressed differently, i.e., turned "on" or "off" differently.

Epigenetic alterations can be maintained from cell to cell, and they can be inherited. They are often responsible for normal development and health, but sometimes they are the reason why a person gets cancer.

Today, researchers have evidence that numerous illnesses, behaviors, and other health indicators are linked with epigenetic mechanisms. These include cancers of almost all types, cognitive dysfunction, and respiratory and cardiovascular disorders, among other health conditions.

Alzheimer's, autism, and other neurological disorders are among the leading causes of epigenetic abnormalities in a person's DNA. These cause irregularities in the processes wherein proteins are made and even lead to severe mental illness.

Healthcare experts forecast that one of the fastest rising markets for healthcare is the epigenetics market, which is predicted to grow at a compound annual growth rate of 17.11% during the forecast period 2021-2031.

The decrease of the global increase in the application of next-generation sequencing, the cost of sequencing, and the advancement of the products are expected to drive the growth of the epigenetics market.

However, the market growth is being restrained by significant challenges such as high-cost epigenetics instruments and a lack of skilled professionals in epigenetic research.

Despite the challenges, the epigenetics market is emerging with tremendous growth potential. Recently, technological breakthroughs have facilitated the adoption of this technology at a rapid and promising pace. In addition, the market of epigenetics is rising due to technological advancements in products offered by the companies.

The growth of this industry is mainly due to the presence of well-established guidelines regarding epigenetics, rising consumer awareness about health concerns, economic growth, and rise in companies that are closely associated with epigenetic medicines.

Several diagnostic companies are developing new products such as antibodies and diagnostic kits to detect the biomarkers that indicate specific modifications. This has led to partnerships between diagnostics companies and pharmaceutical companies, promoting the development of therapeutic drugs, thus strengthening the market even further.

The increased focus on the biomarkers such as histones, DNA, and non-coding RNA and an increasingly rich supply of data will help fuel the growth of this market over the next ten years.

North America holds the largest share in the epigenetics industry due to the developed healthcare infrastructure and patients' high spending power in the region. However, Asia-Pacific is anticipated to grow at the highest rate during the forecast period 2021-2031 due to increased government investment in healthcare facilities and increased awareness among consumers about accessories with quality products.

Epigenetics is the study of changes in genes caused by external factors, but any alterations do not cause that to the genes' DNA sequences; these are passed down to children and can even be transferred between generations!

People need to be mindful of how toxic the generated waste is to the environment. It is crucial that people control and monitor what effluents or waste is discharged into the environment. This means ensuring that the chemicals people use, or produce aren't too harmful. People need to ensure that the food they produce doesn't contain artificial pesticides or hormones; otherwise, it might cause irreversible harm to human bodies.

Batteries And Fuel Cells Technology: The Future Of...

Advance energy storage system has gained popularity over the years with growing concerns over climate change, which has eventually led to opt for...

Fuel cells have emerged as the saviour of our environment over the past decade. Since its inception, fuel cells have revolutionized the energy and...