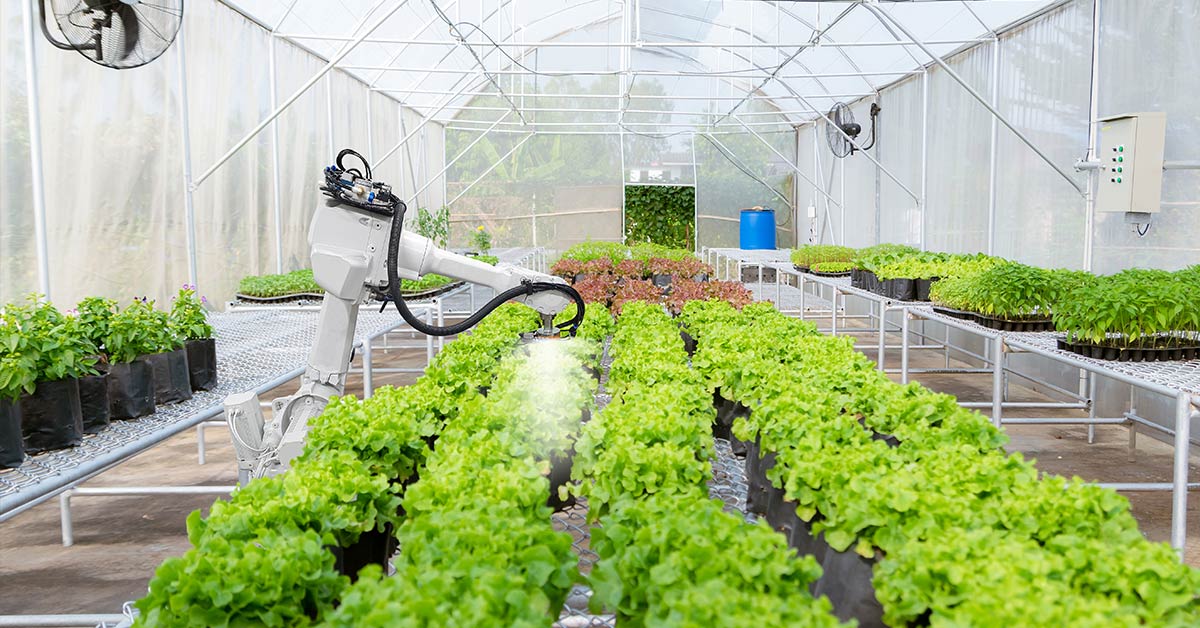 Disruptive technologies and innovations must fall into place for any sector to thrive. In the agriculture industry, farmers are constantly seeking new ways to increase their yield and deal with rising input costs. From collaborative robot (cobot)-assisted milking to cow-herding drones, robots are changing agriculture beyond imagination, and the agriculture industry is being revolutionized by robotics and automation.

Satellite location systems such as the global positioning system (GPS) have made many advances in agricultural robotics as the robotic farm equipment often relies on GPS information to position and locate itself on farms.

Autonomous field plowing, seeding, and navigating tractors and equipment may use a combination of computer vision sensors and GPS to navigate and act as the drivers in robotic plowing trucks.

Artificial intelligence and machine learning have been instrumental in advancing farming robotics technology. Many agricultural robotic advancements use machine vision technology to avoid hazards, identify crops, and even determine if they are ready to be harvested.

Tasks such as weed picking, growth monitoring, harvesting, sorting, and packaging performed by robots become easy to handle in machine vision. Machine learning provides an advanced method of identifying collision paths for autonomous vehicles to adapt and avoid new or unexpected hazards in their paths. Machine or computer vision typically involves cameras feeding information to the robot that locates and accesses the crops around it.

Moreover, the growth in the global agriculture autonomous robots market is expected to be driven by increasing demand for food and the growing need for precision, digital, and smart agriculture practices.

Here is a look at some of the most innovative advancements and emerging robotic applications in the agriculture sector.

The traditional method for sowing seeds involved scattering them using a broadcast spreader attached to a tractor which threw many seeds around the field while the tractor drove at a steady pace. It was not a very efficient method of planting as it led to seed wastage, which was the prime concern.

Thus, automated drone seeders were introduced, which were mostly used on farms for more widespread use in sowing seeds. Autonomous precision seeding combines robotics with geo-mapping, where a map is generated that shows the soil properties (quality, density, etc.) at every point in the field. The tractor, with robotic seeding attachment, then places the seeds at precise locations and depths so that each one has the best chance of growing.

Combatting weeds while making sure the crops have enough room to grow is a constant struggle for farmers. The autonomous weeding technology used in farming plucks out individual weeds by using computer vision and a variety of mechanical tools instead of using chemicals.

Micro-spraying significantly decreases the amount of herbicide used in crop growing. Micro-spraying robots use computer vision technology to detect weeds and then spray a targeted drop of herbicide onto them. Weeding robots have inbuilt sensors that detect weeds. However, rather than applying a spray, they are activated mechanically to remove the weeds.

Spraying pesticides and weed killers onto fields is not only wasteful but can severely harm the environment. Thus, robots provide a much more efficient method. Smart sprayers for herbicide applications are paired with computer vision cameras to identify the targeted weeds.

The aim of smart sprayers is to reduce the wastage of pesticides and herbicides with more efficient application across the field. Therefore, sophisticated systems are introduced that can even identify specific plants and activate only the relevant application nozzles.

Crops such as corn, barley, and wheat are quite simple to harvest, but delicate food items, especially soft fruits such as strawberries and grapes, are difficult to harvest as they require manual dexterity. Harvesting these crops requires a lot of labor and time, both of which are often in short supply.

Autonomous robots use machine learning technology to identify and measure the ripeness of soft fruits such as berries. Once identified, the robots cut the fruits just above the calyx and then grip the stems to transfer them to harvest containers.

The harvest process is quite intense, and farmers often run short of workers due to its backbreaking nature. Harvesting robots are still new, but they have a great potential for easing the problems of limited labor availability.

These robots are expensive and are not yet viable for small farm operations, but it is expected that more harvesting robots can be seen in large orchards in the coming years. Harvesting robots use new technologies to gently handle the harvesting of both soft fruits and simpler crops such as wheat and barley.

The indoor farming industry is using the maximum number of robotic innovations. Automated indoor agriculture is still a new phenomenon, but some companies are making great strides in the industry by using fully automated systems. The robots used for indoor farming use sensors as “eyes” to analyze and pick the plants and to lift and transport the trays across the facility.

A small, automated farm can produce the same yields as conventional farmland. All the plants in the farms are grown under specialized light-emitting diode (LED) lights, and the facility claims to use 90% less water than conventional farming.

As tractors have always been an integral part of the overall farming process, robots are now being designed to adapt to the speed at which the tractors are being driven by drivers. Thus, fully autonomous tractors are becoming popular in the agriculture industry.

There is also a rising trend for follow-the-leader autonomy, where tractors autonomously follow human-driven combine harvesters to collect the grains.

Technology is now evolving toward full autonomy. Assistance from the farmers is being trialed, enabling one driver to guide a fleet, thus boosting the driver’s productivity. Fully autonomous tractors are expected to be launched soon in which the sensing suite will be expandable to avoid collisions and operate even when the GPS signal is lost.

Monitoring huge fields of crops is not an easy task. New sensor and geo-mapping technologies are allowing farmers to get a much higher level of data about their crops than they could get in the past.

Beyond land-based robots, tech firms incorporate flying robots (drones) in farming, which facilitates precision farming during their operations. The use of drones in agriculture is beneficial as they can be used in imaging, crop assessment, land monitoring, crop protection, and land fertility, among others.

Innovation is essential in any sector and is currently more relevant in agriculture than ever before. It seems certain that robotics will continue to revolutionize agriculture and change the method of food production.

The agriculture autonomous robots market has a huge potential. Embracing new technologies such as robotics, machine learning, and computer vision can be a key factor in changing the face of agriculture worldwide.

From Fantasy to Reality: Robotic Exoskeletons...

Imagine the awe Ironman's suit held when the ‘Ironman' comic edition was first released in 1963. It was a visionary concept, a glimpse of the future,...

Mobile Robots to Lead the Market for Logistics and...

As per the International Federation of Robotics (IFR) report, the global sales of industrial robots increased by 16% to 294,312 units in the year...

The surgical medical specialty is an exciting and rapidly growing area of medicine with many new technologies and procedures to deliver in-depth,...