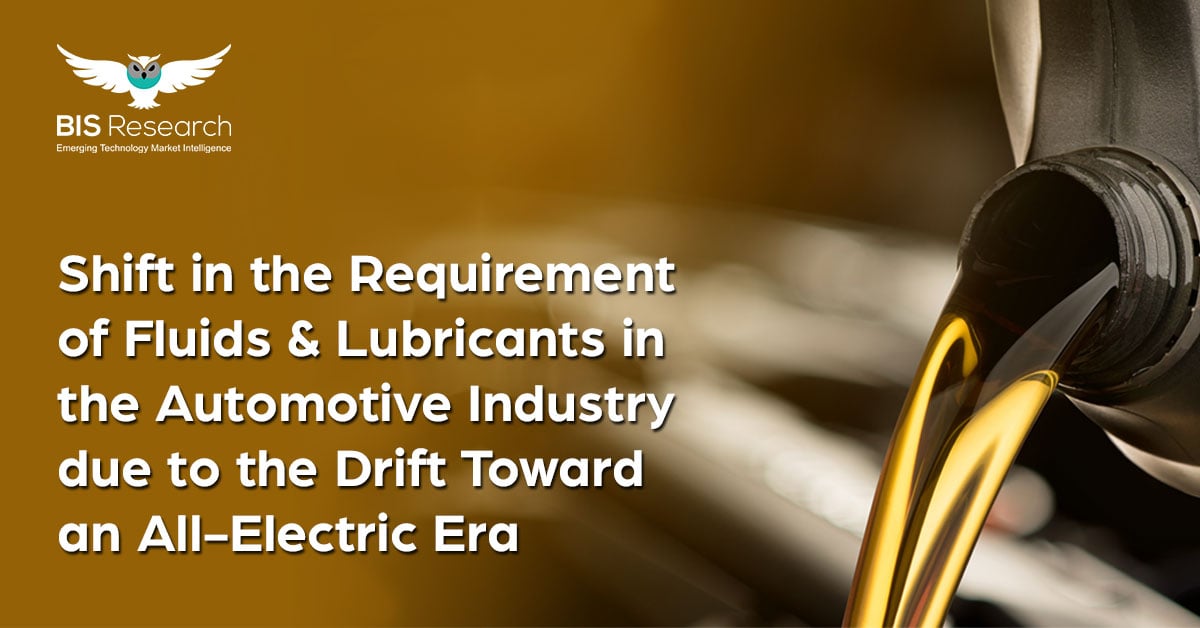 The automobile sector is one of the growing industries driven by innovation. Rising global warming and alarming pollution levels associated with the usage of conventional fuel vehicles have paved the way for alternate energy-powered means of transport. Electric mobility is one of the leading solutions that is anticipated to help meet the proliferating demand for vehicles in a lower-carbon world.

The shift from internal combustion engine (ICE) vehicles to electric vehicles (EVs) has also facilitated a shift in the mechanics required to run such vehicles. One of the changes is being observed in the sphere of the fluids and lubricants.

Lubricating oils are vital for the operation of vehicles. Proper lubrication of engines is crucial as it enables the pistons to glide easily, and the engine has to put lesser effort for moving pistons. This function drives the car to function using lesser fuel and run at a lower temperature, improves the car efficiency, and reduces the wear and tear on the moving engine parts.

Similar to regular vehicles, EVs also require fluids and lubricants to operate. The lubricants that have been developed for internal combustion engines generally fall short to meet the performance requirements of high-tech EV powertrains. According to François Bénard, Prospective and Innovation Manager at Total Lubrifiants, the fluids in EVs are exposed to high voltages and extreme temperatures, amidst which they should protect key components that significantly coil from corrosion while averting short circuits.

Grease helps in noise reduction, for instance, that of spinning of wheels on the axels and vibration of internal combustion engines.  Lubricants in the form of grease help dampen the noise, vibration, and harshness (NVH) in the EVs. The lubrication of the bearings within the electric motor is important as well. Grease is obligatory for the prevention of electric current to reach the surface of the bearing, which would otherwise lead to its degradation and ultimately lead to failure. The greases, therefore, should have dielectric properties that must remain stable throughout the time of operation despite factors such as temperature rise, oxidation, and humidity.

The gearbox and motor are integrated into a single unit for EVs. These compact designs share the fluid that needs to reduce the friction and wear on the gears. In addition to this, the fluids in EVs are required to have the right electrical properties and compatibility with the materials.

When it comes to the electric conductivity of the fluids, there are two significant considerations. If the conductivity of the fluid is too high, it can result in current leakage from the high-voltage terminals at the motor to the external parts of the vehicle, that could be hazardous for any passenger coming into contact with the charged parts. On the other hand, in case the conductivity of the lubes is too low, there is a probability of the electro-static charge to build up, that would enable the formation of an electric arc in the oil. This would damage the bearing and degrade the fluid and its protective features. Hence, there is a requirement of lubricants that are not only poor electric conductors but also are static dissipative, i.e., allow charge to pass through slowly.

Most of the electric components and wirings involved in the EVs are made of copper; hence, the gearbox fluids have to offer copper corrosion protection, while at the same time maintaining compatibility with the other materials involved in the construction.

The components in the EVs are subjected to the heat dissipation effect of the electrical energy. The transmission fluids are required to have the attribute of efficient heat evacuation at high temperatures up to 180 degrees Celsius.  There are battery pack designs enabled by the application of these lubricants. In one such design, the battery pack systems use a method of indirect cooling, wherein a water/glycol solution is pumped through conduits that run through the packs. These coolants are incompatible with the battery cells, and hence the conduits are deployed. However, this method of cooling is inefficient as it can lead to the development of local hotspots that can accelerate the aging of the battery cells.

Another design for the battery pack is based on an enhanced technique called immersion cooling. Here, the fluids, called thermal fluids, aren’t contained in tubes, but directly pumped through the battery pack to reach every cell directly to absorb the heat.

The advantages of this technique include:

As per Chris Dobrowolski, E-Fluids Co-ordinator at Shell, the automakers such as Fiat Chrysler Automobiles, Mercedes AMG, and McLaren are investigating thermal fluids for high-speed EV projects. The thermal management fluids for the power electronics and battery are set to be launched in the near future to support the growth of the EV industry.

Key Companies in the Domain and Their Recent Developments

Companies such as Royal Dutch Shell (Netherlands), ExxonMobil Corporation (U.S.), BP plc (U.K.), and Total S.A. (France) are the major players in the industrial lubricants market. The competitive landscape of the market involves new product launches, partnerships, and investments. For instance, in May 2019, Shell launched E-fluids for EVs. This range includes E-Transmission Fluids, E-Thermal Fluids, and E-Greases, aiming to improve EV performance. In September 2019, ExxonMobil launched its Mobil EV, a comprehensive set of fluids and greases manufactured to meet the evolving drivetrain demands of battery EVs. Following this launch, there was a partnership between ExxonMobil and Porsche, wherein ExxonMobil would provide high-performance electric powertrain fluids to drive Porsche’s Formula E series electric car for the 2019/2020 season. At the Auto Expo 2020 in India, Kluber Lubrication, a part of the Freudenberg Group, introduced a series of lubricants for EVs.

The conferences and symposiums in the sphere of lubricants in EVs provide a platform for experts from across the globe to present and discuss EV innovations aiming to contribute to a more sustainable electric mobility future. The list includes the ICIS World Base Oils and Lubricants Conference held in February 2020, the first EV Fluids Symposium organized by Petronas Lubricants International (PLI) at its Global Research and Technology (R&T) Centre in Turin in November 2019, and the CTI Symposium where Total presented two new lubricant ranges developed for EVs (Total Quartz EV Fluid and Total Rubia EV Fluid) in Berlin in December 2018.

It may be concluded that the thriving EV ecosystem and the changing pattern of adoption and advancement in attributes of lubricants and fluids in automobiles are interdependent. The growing shift toward an alternative form of vehicle requires improved lubricants to function. Also, the EVs segment is anticipated to flourish with the introduction of innovative lubes. Owing to the various factors, as discussed above, these fluids are anticipated to strengthen electric mobility by boosting the lifespan and performance of EVs.  The increasing efforts by the automotive manufactures toward revolution in lubricants used are, in turn, contributing to the growth of an all-electric era in the automotive sphere.