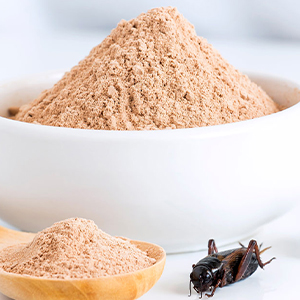 Balanced nutrition is essential for optimal physical and mental performance for humans. All the nutrition components such as carbohydrates, vitamins, minerals, and protein play an equally important role in maintaining a healthy body. The purpose of different food sources, natural or supplements, is to provide optimal nutrition. Deficiency of nutrition can cause several health issues in the body.

Similarly, protein is one such important part of nutrition in a basic diet. However, it has been estimated that one billion people globally suffer from protein deficiency. For instance, in Central Africa and the South Asian regions, up to 30% of children take too little protein in their daily diet as the staple diet in these regions does not include sufficient protein sources.

With the constantly increasing world population, the supply of protein-based food worldwide has become extremely difficult. The supply is also hampered due to increased pressure on scarce resources available from land as well as water bodies due to the extreme impact of climate change.

Lack of protein leads in diet to various issues such as slow healing of wounds and injuries, increased vulnerability to severe infections, weakened immune system, risk of bone fracture, stunted growth, etc. These severe health issues affect more than 160 million children every year in the population with less access to protein sources.

The increasing population, as well as the lack of equal distribution of food across the world, is putting a significant burden on the agriculture industry. Hence, researchers and food manufacturers are concentrating on different sources other than plant crops to obtain the nutrition required by the world population.

Hence, insect protein is one such alternative that has gained significant traction in the food supplement industry. An insect is a sustainable source of protein which can be a solution for the food industry. The most protein-rich insects, such as wasps, bees, and ants, contain a significant amount of protein. According to the food experts, wasps possess protein of about 13g, bees contain 77g of protein, and ants offer about 100g of proteins.

Due to such positive results of research and increasing demand for sustainable protein-rich food, significant growth is expected in the market. According to the BIS Research report, the global insect protein market was estimated to be at $342.87 million in 2021, which is expected to grow with a CAGR of 26.49% and reach $1,386.55 million by 2027.

To get a free sample of the report, click here

However, the acceptance of insect protein as a food source is also difficult for the general population, and it also comes with several challenges. This article is further going to explore the good and bad aspects of consuming insect protein.

1. Sustainable Environmental Factors- The process of insect farming has low carbon, water, and ecological footprint compared to the breeding process of other livestock species such as cows, buffaloes, and sheep. This makes it highly useful from an environmental sustainability perspective. The reasons for sustainable production include high feed-conversion efficiency; emission of fewer greenhouse gases and ammonia; no animal welfare objections; and the insects can be reared on organic side streams while reducing the environmental contamination. Hence, the food industry is inclined to create mass consumption of insect protein.

2. High Nutritional Value- Insect protein supplements provide numerous health benefits. According to nutrition experts, edible insects are a good source of protein, fatty acids, vitamins, and minerals. They also contain a much higher percentage of minerals, including iron, copper, zinc, and magnesium, compared to beef. Hence, it is considered to be a potential food source for healthy human diets.

According to the Food and Agriculture Organization (FAO), the protein content available in insects are much higher than other conventional sources such as meat and plant-based products. In 2020, a clinical trial held at the University of Wisconsin-Madison showed that consumption of crickets could improve a people’s gut microbiome. Another study from the University of Teramo in Italy showed that insects contain a high content of antioxidants, which help in maintaining cellular health.

3. Animal Feed- Due to the various nutritional benefits, insects are also considered a good source of animal feed. Currently, sources such as soybean and grain meal are used as a rich source of protein in the animal feedstock. However, insects like black fly larvae are a more sustainable and extremely high source of protein for animals.

1. Allergies caused by insect protein- As it has been established that insects are a great source of protein and can be consumed by humans and animals alike, it can also cause severe reactions for many people who are not accustomed to an animal-based diet. A recent study from Thailand estimated that insect consumption triggers allergic reactions in nearly 13 out of 100 consumers. The insect protein consumption may also lead to allergic reactions, especially in people with particular ailments such as asthma, allergic skin rashes, and hay fever. The allergic reaction can be caused by insects such as silkworms, locusts, grasshoppers, mealworms, caterpillars, cicada, and bees.

According to the Allergen Bureau, the proteins tropomyosin, as well as arginine kinase, are identified as the prime allergens within different edible insects, which can invoke an allergic reaction while consumed by sensitized consumers. These two proteins are further known for even triggering crustacea as well as house dust mite allergies to people.

2. The potential threat of disease transfer- There are good reasons why most animals and insects are not a part of the natural human diet. Many insects feed on decaying matter such as rotting food, animal corpses, and human waste. These are full of bacteria that can be transferred to humans if consumed without caution. This is a common danger associated with insects caught in the wild.

There is also a potential threat of the amount of microbial fauna and spore-bearing bacteria hidden into farmed bugs that are used for food. The insects need to be bred in a clean environment. However, many insect farms in Asia don’t necessarily obey the high hygienic standards.

3. Anti-nutrient- Insects also contain substances that interfere with the body’s ability to absorb and use protein. These substances can compromise the nutritional value of many foods, especially plant-based food sources such as rice or flour. Some common anti-nutrients are phytic acid, tannins, and lectins.

With the increasing global population, demand for protein in all its forms is increasing significantly. Protein is an important element for the growth and development of both animal and human bodies. There are several benefits of adding insect protein into the diet, but it comes with certain challenges which create a hindrance in its mass consumption. However, it can still be a substantial alternative to dealing with food challenges.

The digitalization of the manufacturing industry has helped overcome several challenges associated with manual drafting of designs. The introduction...

Inside the Industry: Implications of the COVID-19...

Surgical robotics, being one of the emerging research areas in the healthcare ecosystem introduced in the 20th century, is a leading contributor to...

Robotics and imaging help not just with the correct diagnosis but also support doctors during surgery through enhanced imaging while making...